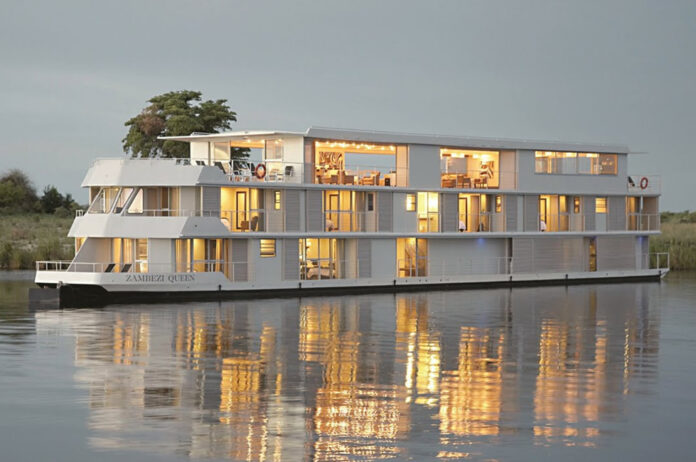 South­ern Africa is one of my favorite regions on Earth. The topog­ra­phy is diverse, ani­mal viewing—including the “Big Five” of African ele­phant, rhino, lion, leop­ard, and Cape Buffalo—is almost too easy, and the peo­ple are incred­i­bly engag­ing. That’s why I was very intrigued to learn about the new Zam­bezi Queen riverboat—built in 2009—that is now offer­ing safaris on the Chobe River in north­east Botswana.

If you’re addicted to HBO’s series No. 1 Ladies’ Detec­tive Agency that’s set in Botswana, you know the country’s south­ern bor­der is buf­feted by South Africa, to the west and north is Namibia, to the east is Zim­babwe. (A very small por­tion of the north­ern bor­der is also shared by Zambia.)

Vis­i­tors from all around the world are drawn to sev­eral regions of Botswana: the Kala­hari Desert at the cen­ter of the coun­try, the lush Oka­vango Delta in the cen­tral north, and Chobe National Park to the north­east. It’s at Chobe National Park that you’ll see the largest pop­u­la­tion of African ele­phants (num­ber­ing close to 120,000).

The steel hulled Zam­bezi Queen river­boat explores the Chobe between Namibia’s Caprivi Strip and Chobe National Park and ties up just miles from where four countries—Botswana, Namibia, Zam­bia, and Zimbabwe—meet. (It’s an easy trip to the dra­matic Vic­to­ria Falls from here.)

You’ll enjoy the pool on the top deck (for­ward) as well as the din­ing room and lounge with floor-to-ceiling win­dows that are per­fect for spy­ing game all day long.

Onboard guides will take you on safaris via ten­ders (three alu­minum high-speed boats) that allow for super up-close view­ing of ani­mals. Land-based game view­ing from 4×4 vehi­cles is also an option in Botswana’s Chobe National Park. If you’d like to see what local vil­lage life is like, the Zam­bezi Queen can arrange for a tour. And, there are two fiber­glass boats for those who wish to hook some tiger fish and bream.

Two– and three-night safaris are avail­able and are priced in South African rand. Pair your voy­age aboard the Zam­bezi Queen with one or two game lodge stays in Botswana; the Royal Liv­ing­stone in Zam­bia for Vic­to­ria Falls; or lodges in South Africa’s Tim­ba­vati or Sabi Sands Pri­vate Game Reserves.

Where to Go for Luxury Holidays During Colder Months

What to Know Before Visiting Tahiti

A Place Where Students Can Fall in Love