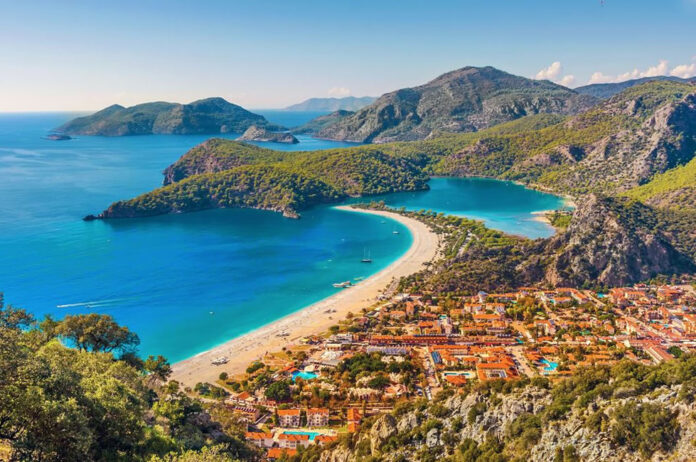 Fethiye is a small city in the Aegean region in Turkey and is a part of the district of Mugla Province. It a small and quiet town tucked away below the Mount Mendos hills, which is a part of the Taurus Mountain chains.

The city was also referred to as Telmessos during the olden days. The city has a lot of ruins from the Hellenistic and Roman era and it is very rich in its culture and traditions. Fethiye is a very beautiful city with some of the most clean and pristine waters. The city of Fethiye has many exotic trees such as the plane tree, myrtle, laurel, acacia, and olive trees and a wide stretch of pine forests all along the coast and the city.

Fethiye has many historic ruins that date back to the Roman Empire such as the Tomb of Amyntas that is a part of the Lycian rock tombs. It is one of the world’s finest structures that have been created on a rock. The walls of the Tomb have the Greek inscription “Amyntou tou Ermagiou” that means “Amyntas was the son of Hermagios”. The ruin of the Roman Amphitheatre at Letoon, which is situated about 50 km from Fethiye, is another historical marvel, as most of the amphitheatre has been carved from the limestone hill without any joints.

The Telmessos Ancient Theatre was recently excavated in 1993 by the Fethiye Archaeology Museum; this theatre is supposed to have been built in the 2nd century on the ruins of a Greek theatre. The Archaeological Museum in the city of Fethiye houses different artefacts that have been excavated in the recent times. These artefacts belong to the Hellenistic, Lycian, Ottoman, and Roman periods.

Fethiye Turkey (by kcsarioglu)There are other places to visit in Fethiye other than the historic remains such as the Saklikent Canyon that is 18 km long and 300 metres deep and came into existence due to the constant water flowing from thousands of years. The Fethiye Castle is said to be built for the Knights of Saint John and have some carvings of history on it.

The most famous beach in Fethiye is the Oludeniz Beach with clear water and abundant sunshine. There are many hotels and resorts of every price range that surround this beach making it easily accessible to the tourists. The other beaches in Fethiye are the Calis beach that is just 5 km away from the centre of the city and it is famous for its cool breeze and beautiful sunsets. The Patara beach is famous for the white sand around the beach and it is an ideal spot for camping and picnics.

Fethiye has many good restaurants and bars lined up near the beaches and they serve some interesting delicacies and authentic Turkish delicacies. The best time to visit Fethiye would be summer and spring when the city is abuzz with lots of activities and sports. Driving out of this small city will lead you to many interesting places such as Gocek that is situated on the Fethiye and Mugla highway where you can see a spread of islands and bays that feast your eyes to some amazing scenic beauty.

Tips for Cutting Corners to Afford Your Annual Vacation

South America, a Land with the Best Luxury Travel Destinations in the World