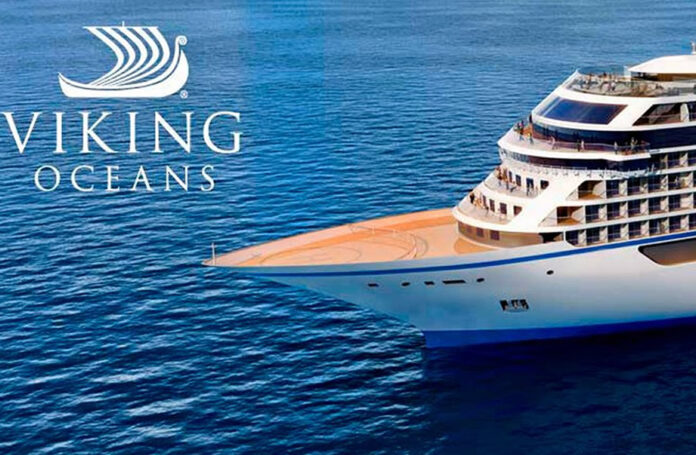 Sister ship to the Viking Star, the Viking Sea was launched in 2016, Viking’s second ocean sailing ship. Despite many of its own unique features, the vessel has also incorporated some of the more traditional Viking river-ship features. Standing out from the crowd, the Viking Sea offers extreme value for money. Evident through one example of free beer and wine at both lunch and dinner. In addition, complimentary Wifi, Room Service, and excursions are also provided to all passengers. If that doesn’t warrant individuality,  the Viking Sea does not charge an additional fee at any specialty restaurants.

Over the years, Viking Cruises have gained a reputation for sailing the vast rivers of the world. Yet, (clue in the name) the Viking Sea will be sailing the ocean. Thus also covering destinations such as the Baltic Sea,  The Caribbean, and Transatlantic Crossings.

What may seem quite peculiar is the Viking Sea’s hidden Lichen garden. Hidden underneath the atrium stairs, the garden is an explosion of exotic colors. Catching wide attention.

Despite being a Norwegian Ship, the Viking Sea certainly appreciates global culinary. Manfredi’s is the widely popular onboard Italien restaurant. It was in fact named after the chairman of Silversea Cruises, Manfredi Lefebvre d’Ovidio. Full ranges of dishes feature on the menu from seafood to pasta. Yet, the most popular dish on the menu is the Florentine Steak. The Bistecca Fiorentina. Widely popular for its luscious flavor and thickness, it’s no surprise this is one of the most ordered dishes onboard.

Although I shall never be lucky enough to stay in an owners suite, you may have enough money. The owner’s suite onboard the Viking Sea is certainly a one-off. The suite features its very own sauna with a view of the ocean. Thus allowing passengers to be sent in a state of pure relaxation as they watch the world pass by. You may have recently spotted to sauna onboard Jane McDonald’s new series of “The Cruise”.

For deep relaxation onboard the Viking Sea, you may choose to visit the complimentary LivNordic Spa. This spa features a variety of treatments to soothe even the most stressed (thinking of you mum). Value for money is demonstrated through the LivNordic Spa. In fact, the thermal suite is complimentary to all passengers. Here, customers can relax in the hot-tub, thalassotherapy pool, therapy shower or ceramic heated lounge.

Offering a lap of luxury, all cabins onboard the Viking Sea feature a private Veranda. Alongside that, features the enhanced storage element of the cabins. These cabins even feature a personal desk; and makeup-mirror. Of course, all your usual’s are included. Such as the Paulig coffee maker and plenty of plug sockets for your devices. Ensuring you keep warm at all points, the cabins actually include both a heated bathroom floor and even an anti-fog mirror.

1. Snow Onboard The Viking Sea

Perhaps one of the Viking Sea’s strangest elements is the chilled Snow Grotto. This facility is situated in the spa center, even featuring falling snow from the ceiling. With a bench to sit on, you can be transported into complete relaxation. Or if you’re like me and you occasionally need a little hydrotherapy; you can relax in the hot tub. For more information on the Viking Sea, make sure you check out another cruise blogger, my friend Cruise Miss, where she talks about the float out of the Viking Sea.

Top 7 Uncool Things To Do On A Cruise Ship

British Airways Gets You to Africa—for Free!

Kyrenia: the Jewel of Northern Cyprus

Newspaper is your news, entertainment, music & fashion website. We provide you with the latest news and videos straight from the entertainment industry.
Contact us: contact@yoursite.com