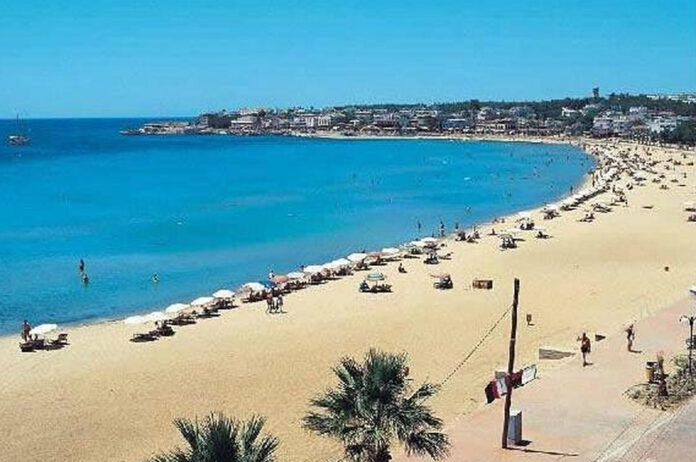 If a quiet and peaceful holiday is what you are looking for, look no further than Altinkum, the blissful Turkish paradise along the south Aegean Coast. Unlike some of its more well-known counterparts such as Kusadasi and Bodrum, Altinkum tends to be much less boisterous, and one can afford to have the perfect getaway here, without the excess hullaballoo seen in other places like the earlier mentioned. The primary draw of this resort town is its three long sandy beaches. In fact, the place Altinkum gets its name from these beaches since Altinkum in Turkish means ‘golden sands’. The beaches at Altinkum stretch a long way, right from the little harbour at one end to the rocky cliff at the other end.

Altinkum TurkeyMost of Altinkum’s activities also tend to centre around these beaches; the British as a community are particularly drawn to the prospect of spending entire days lazing on the golden sands along the pristine waters, while nights are spent at many of the bars and restaurants dotting the landscape along Altinkum’s beaches. Water sports such as windsurfing, jet-skiing, a banana boat ride, or perhaps even a scuba diving lesson at the beaches are all major attractions at the beaches. In addition, there are a plethora of excursions, expedition, and boat trips to other resorts in the vicinity as well as adjacent towns and other places of historic interest. In fact, while at Altinkum, those with a penchant for history would enjoy visiting the Temple of Apollo at Didyama as well as the enormous Roman ruins at Ephesus. The spas and calcium deposits at Pamukkale are also a big draw.

For the nightly birds, Altinkum has a variety of entertainment options; Dolphin Square is where a lot of the nightlife of Altinkum tends to centre around. At the same time, there are a significant number of bars which dominate the façade along the beaches of Altinkum. The drinks at most of these places tend to be inexpensive, further making them a huge draw among local and international tourists alike. Activities at the bars, discotheques and night clubs include belly-dancing to bingo, singing karaoke, playing pool as well as plain old disco dancing! The coveted crown of Altinkum’s most happening entertainment spot goes to Medusa, an open-air night club which gets really jammed on certain days. The Dolphin Bar is also immensely popular. When you are out of partner, take a look at Istanbul escorts gallery, most of the models are available in Altinkum too.

Foodies will just fall in love with Altinkum – over and over again! There are a plethora of options available in Altinkum when it comes to food. Although, Turkish and British fare tends to dominate, it is not that difficult to find Chinese, Indian as well as cuisine from various other parts of the world. Since Britons dominate in terms of nationalities of visiting tourists here, they are pampered considerably with the pound sterling being accepted as a mode of payment at many of Altinkum’s restaurants.

With so much on offer, no doubt there is something for everyone at Altinkum, one of the most popular travel destination of Turkey.