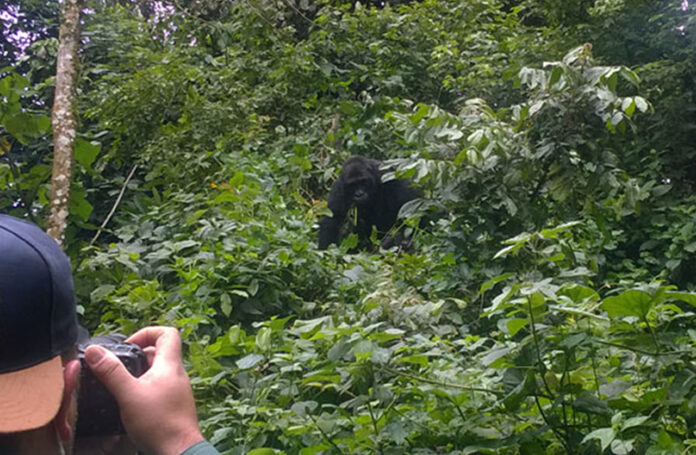 Instead of trying to make your life perfect, give yourself the freedom to make it an adventure, the best adventure you can have is to experience a primate safari to visit the mountain Gorillas & Eastern Lowland gorillas in Africa.

The gorilla trekking destinations are divided into three destinations by Country and National Park. There are 4 Places in different countries that you can experience this and each destination comes with it’s own unique adventure. Mountain Gorillas can be visited only in Uganda, Rwanda & Democratic Republic of Congo, and there are only 1060 remaining in the world.

Uganda is a landlocked country in East Africa, it’s diverse landscape encompasses the snow-capped Rwenzori Mountains and immense Lake Victoria. Uganda is commonly known as the pearl of Africa, and being a British colony the most spoken language is English yet other local Languages are spoken more broadly. Uganda is ranked high when it comes to primate safaris as well as Wildlife sightings and is among the top destination known for a combination of Gorilla & Wildlife Safari.

All mountain gorilla destinations are located in the south western part of Uganda, we call this the Switzerland of Africa. Here there are two destinations for Mountain Gorilla trekking,  Bwindi Forest National Park and the Mgahinga National Park.

Bwindi park is a sanctuary for colobus monkeys, chimpanzees, and many bird species such as hornbills and turacos. It is most notable for the 340 Bwindi gorillas that live there, this is approximately half of the world’s population of the critically endangered mountain gorillas.

Four habituated mountain gorilla groups are open to tourism: Mubare; Habinyanja; Rushegura near Buhoma; and the Nkuringo group at Nkuringo. An added feature of trekking in Bwindi is that the lodges are located within the jungle.

Population: The number of mountain gorillas has increased from the 2010 estimate of 786 after a count in Uganda’s Bwindi Impenetrable National Park.

Mgahinga Gorilla National Park is a national park in the far south-west of Uganda near the town of Kisoro, it forms part of the Virunga Massif.

Population: There is only one Gorilla Family to be visited in Mgahinga National Park, we can’t estimate the Gorilla population in this region because they are cross boundary Primates.

Costs of the Gorilla Permits

Mountain Gorilla Trekking permits in Uganda are cheaper compared to those in Rwanda for the Volcanoes National Park experience.

The Cost of the trekking permit in Uganda differs depending on whether it is peak season or low season.

The permits costs USD 450 for April, May and November and in other months of the year they will costs USD 700.

Rwanda is a landlocked East African country with a green, mountainous landscape. It is renowned for mountain gorillas and golden monkeys in the famous Volcanoes National Park, home also to 4,507m-tall Mt. Karisimbi and 4 other forested volcanoes. It is also known as the land of thousand hills.

Rwanda is bordered by Uganda, Tanzania, Burundi and the Democratic Republic of the Congo. Rwanda is in the African Great Lakes region and is highly elevated; its geography is dominated by mountains in the west and savannah to the east, with a number of lakes throughout the country.

The Volcanoes National Park lies in north western Rwanda and borders Virunga National Park in the Democratic Republic of Congo and Mgahinga Gorilla National Park in Uganda. This national park is known as a haven for the mountain gorillas. It is home to five of the eight volcanoes of the Virunga Mountains (Karisimbi, Bisoke, Muhabura, Gahinga and Sabyinyo), and spans 160 sq km covered in rainforest and bamboo. The park was the base for the zoologist Dian Fossey.

Cost of the Gorilla permit

The Rwandan Gorilla permit is fixed to USD 750 from January to December due to the fact that they don’t have seasonal discounted prices.

Gorilla Trekking can be done throughout the year and just be aware that it rains the entire year.

In the Congo you can visit the centre for orphaned gorillas which is located in the Greater Virunga National Park.

Many travel guides will advise you not to visit the Congo as it can be unsafe, but it is ranked as the best experience for mountain gorillas and also offers the opportunity to hike the active Volcano of Nyiragongo which can be summited in just two Days .

In Democratic Republic of Congo

The Democratic Republic of the Congo – abbreviated to DRC, is a country located in Central Africa. The DRC borders the Central African Republic, with South Sudan to the north; Uganda, Rwanda, Burundi and Tanzania to the east; Zambia and Angola to the south; the Republic of the Congo to the west and the Atlantic Ocean to the southwest. There are two sites for Lowland gorilla Trekking Adventures in the Congo.

Eastern Lowland gorilla Trekking can be experienced in the Kahuzi biega National Park as well as the Maiko National Park.

The Kahuzi-Biega National Park is a protected area near Bukavu town in the eastern area of the DRC. It is situated near the western bank of Lake Kivu and the Rwandan border. Many travellers visiting Kahuzi biega national park use the Ruzizi Border of Rwanda. The park is the best destination for Eastern lowland gorillas and there are a number of Gorilla families that tourists can see.

Cost of the Gorilla Permit

Congo Gorilla Permits are the cheapest at USD 400 per person.

Don’t miss to the opportunity to see for yourself the difference between these gorillas groups.

Established in 1970 by the Belgian photographer and conservationist Adrien Deschryver, the park is named after two dormant volcanoes, Mount Kahuzi and Mount Biega, which are within its limits. With an area of 6,000 square kilometres (2,300 sq mi), Kahuzi-Biega is one of the biggest national parks in the country. Set in both mountainous and lowland terrain, it is one of the last refuges of the rare species of Eastern lowland gorilla (Gorilla beringei graueri), which are listed as endangered under the IUCN Red List.

Kyrenia: the Jewel of Northern Cyprus