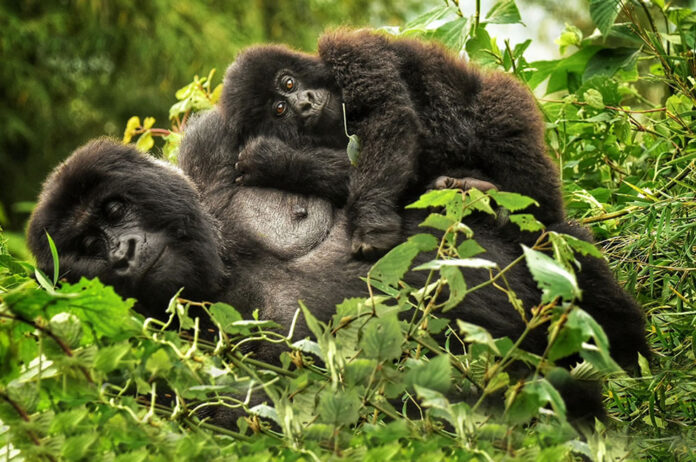 Mountain gorilla trekking, bird watching, classic game drives, nature walks, cultural experiences, hiking, and lakeside relaxation—these are just some of the ways to spend your vacation in Rwanda. The country has experienced a dynamic transformation since the tragic genocide that took place in 1994. Memorials are scattered throughout the country, but the people of the “Land of a Thousand Hills” do not let history control their destiny, and visitors have the opportunity to develop a deep appreciation for the growth and unity of the Rwandan people.

Conservation organizations, government agencies, and ordinary Rwandans have developed strategies to ensure long-term prosperity for the next generation, founded on the country’s many natural treasures, the best-known of which are the Virunga’s mountain gorillas of Rwanda.

The country also offers magnificent hiking and trekking through dense rain forests to the summits of volcanic peaks, and even high above the tree canopy. In Rwanda you are always near amazing wildlife, both large and small. The treetops are filled with the chatter of primates and the calls of birds. Butterflies drift along wind currents in search of the perfect wildflowers. As you explore the country’s outback, you sense the presence of the sovereigns who once ruled here, and you may even meet Rwandans who keep alive ancient traditions and crafts that go back many centuries.

Thanks to the incredible work of Dian Fossey and other global conservationists, Africa’s mountain gorillas have captured the hearts and minds of people around the world. If seeing these creatures in the wild is your ultimate dream, tour their natural habitat in Volcanoes National Park. Efforts to protect mountain gorillas from the effects of habitat destruction, poaching, and other threats have led to the creation of an amazing infrastructure that provides the privacy and support the gorillas need to not only survive in the modern world, but thrive for generations to come.

The Rwandan government restricts the number of visitors who are allowed to go on  a gorilla safari, and this means that securing your premium spot for a mountain gorilla trek is a privilege few people experience. Estimates indicate that approximately half of the mountain gorillas in the world live in the Virunga Mountains, part of the Volcanoes National Park, so your primate trek through the montane forests will be rewarded with an hour of watching the gorillas engage in natural behaviors.

The heartwarming scene will highlight the close bonds between the members of the gorilla family, as well as the playful antics of gorilla infants. The presence of a powerful silverback will stir your emotions as he sits quietly, ever watchful of his family, with a gentle nature that makes human onlookers feel connected in an unexpected way. Participating in a mountain gorilla trek in Volcanoes National Park requires a great deal of coordination, as relatively limited permits are issued each day.

Visiting the former research home site of Dian Fossey is the perfect complement to any mountain gorilla trek. Hiking up her grave shrine is an experience that appreciates education, courage, advocacy, celebration, and tragedy. Fossey was known for her work as a primatologist, both studying the gorillas and spearheading efforts to protect them. In 1967 Ms. Fossey began a research effort that would ultimately become her life’s work, as well as the foundation for developing a deep, personal connection to the primate species and to many of the individual gorillas with whom she spent her time.

Her most beloved gorilla was a silverback she named Digit. After first spending time in the Democratic Republic of Congo studying mountain gorillas, Fossey was taken prisoner by soldiers. She escaped and relocated to Rwanda, where she established the Karisoke Research Center. The prevalence of poaching at the time had taught the gorillas to be fearful of humans, but Fossey was able to gain their trust with her quiet patience, diligence, and respect.

In addition to studying the primate, Ms. Fossey and her staff conducted anti-poaching patrols to protect the gorillas and rescue those that were orphaned. Many of the gorillas she studied were killed by poachers over the years, including Digit, who was killed while protecting a baby gorilla. In 1985 Fossey also became the victim of poachers, who saw her as a threat and murdered her.

The Dian Fossey Grave Shrine Tour in Volcanoes National Park allows you to walk in Fossey’s footsteps and visit the site where her remains are buried alongside Digit and other gorillas. Spending time at the site and learning about Fossey’s work will connect you to the world’s endangered mountain gorillas in a way certain to be one of the most intimate and heartfelt safari experiences of your time in Africa.

If you daydream about climbing, hiking and trekking in the African highlands bush, Rwanda is the preeminent destination for your outdoor vacation. Both Nyungwe Forest and Volcanoes Park offer superb networks of trails that take you into some of the most breathtaking landscapes on the planet.

The most challenging of the treks takes you to an elevation of 4507 meters, to the snow-capped summit of Mount Karisimbi in Volcanoes National Park, the highest peak of the eight major volcanoes in the Virunga field. The two-day trek will challenge you physically and mentally while immersing you in the beauty of four distinct vegetation zones. Another high-elevation hike waits at Mount Bisoke, the most visited summit in the Virungas.

The 6-7 hour amatuer ascent hike takes you near agricultural fields, through a forest, and near the Dian Fossey gravesite before reaching the unexpected surprise of a crater lake at the summit.

To our guests, Nyungwe National Park, in southwestern Rwanda, seems to be fashioned solely for the hiker or trekker in all of us! A network of trails crisscrosses and winds through the park, offering everything from leisurely one-hour nature walks to seven-hour and multi-day outings for experienced hikers.

The immense beauty of towering trees, waterfalls, delightful primates, and colorful birds is the centerpiece of many of the trails in Nyungwe Park during your tour, but some trails offer true adventures for our guests. The most challenging trail in the park is the Congo-Nile Divide Trail, a pathway along two legendary rivers, where hikers can daydream about being an early explorer seeking the mysterious source of the Nile River.

For a unique view of the rainforest, the novice-level Canopy Trail takes you to observation points above the treetops. History buffs will love the chance to step back in history on Karamba Trail and visit a former gold mine, an army camp, and a local market. Photographers will be thrilled by the stunning beauty of Rwanda’s wildflowers along the Igishigishigi Trail.

For a change of pace, take the Kamiranzovu Trail to the park’s wetlands and swamps to discover large and small creatures that inhabit these unique ecosystems, or pack a picnic lunch and head to Ngabwe Trail to enjoy a lovely outdoor meal with impeccable views. Simply imagine your ideal hiking and trekking holiday, and Rwanda will deliver an experience like no other!

Mountain gorillas are the best-known of Rwanda’s primates, but the country offers many other scampering creatures to delight visitors, including chimpanzees, golden monkeys, blue monkeys, and black and white colobus. Chimpanzees are considered the most human-like of primates, and Nyungwe National Park is the premium destination in Rwanda for chimpanzee viewing experiences. Just before daylight, you start a journey into the forests where families of chimps live in a natural habitat.

The effort to find them makes for a wondrous combination of adventure and mystery as you follow the keen leadership of a professional guide, learning the nuances of tracking and locating these fast-moving animals. Each day the groups of chimps move through the forest in search of food before finding a secluded place to build their nests and rest for the night. Fortunately, our guides are experts in locating the chimpanzees, so your chances of seeing them are very good.

Another primate species that thrills our guests is the golden monkey, a colorful species that constantly scampers through the treetops, stopping only to dine upon fruits and leaves. The golden monkeys of Rwanda can be found in the incredible bamboo forests of Volcanoes Park, as well as Gishwati-Mukura Forest in the northwestern part of the country. Unconfirmed sightings have also been reported in Nyungwe Forest.

Another of the 14 primate species in Rwanda, many of which are endemic and endangered, are the black and white colobus monkeys that live in groups of over 300, the largest of their kind on the continent. Hikes through the deep African rainforest to find the colobus can be challenging for some guests. During your primate treks, you may also come across blue monkeys, grey-cheeked mangabeys, vervet monkeys, Dent’s monkeys, L’Hoest’s monkeys, and red-tailed monkeys.

Exploring The AIDA Prima In Under 4 Hours!